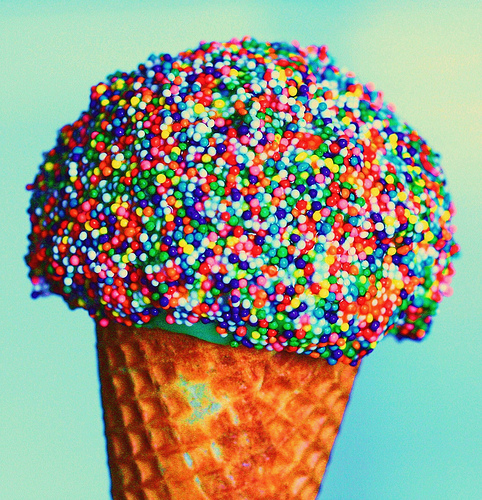 "Senior year was a blur of grilled cheese, ice cream and mixed nuts...I had a year's worth of calories to make up for." ‚ÄĒTamara

Round and round the circle we went. “Operator? Operator?”

I was a plump child, fond of cheeseburgers and ice cream sandwiches. By the fourth grade I was proportioned like an adult, far beyond little girls‚Äô jeans and training bras. If I had been ten years older, I would have been called sexy, but at the time there was only one word my classmates and family could say: fat.

“How come my brothers can have ice cream, but I can‚Äôt?”
“Because they don‚Äôt have a weight problem.”

Being thin makes everything better...right?

In sophomore year of high school, I dropped 50 pounds by eating 300 calories and running 3-5 miles per day. My hair fell out, my nails were brittle, and I felt constantly freezing, but I was finally skinny enough to win society‚Äôs seal of approval. Skinny = happy.

But I wasn‚Äôt happy. And after a few years of not eating, I became angry. I tolerated all that pain-why wasn‚Äôt my life perfect yet? One day, a well-meaning family friend gave me a large tin of trail mix as a gift. Then my delicate anorexic world unraveled.

Senior year was a blur of grilled cheese, ice cream, and mixed nuts. Cookies, energy bars, and breakfast cereal-no food escaped from the kitchen. I would eat nothing at school, but when the clock struck three the refrigerator opened. After all, I had three years‚Äô worth of calories to make up for.

They gave me pills for depression. They encouraged me to join after-school clubs. They showered me with the affection I had starved myself to attain, but by then I was too far gone. It wasn‚Äôt until I moved halfway across the country for college that I could start afresh with new habits in a new environment.

Sanity slowly restored itself as I lost the freshman 15. It‚Äôs hard to binge when you have to eat in public cafeterias. Because I had no spare change for vending machines, I quickly learned to eat decent meals to last through nights of reading assignments. Plus, I had to walk at least two miles a day just to get to my classes, and when I met my one and only I had no more reason to obsess over (i.e. binge and cry) about my looks.

Of course, there was the occasional bag of caramel-filled kisses or box of Quaker breakfast cookies that would mysteriously disappear, but by graduation I was at a stable weight and state of mind. This year I started my own blog, The Amateur Nutritionist, to learn even more about healthful and tasty cooking. Now I take my time to enjoy food and experiment liberally in the kitchen. I‚Äôm getting back into running, but not enough to break my body down and never to compensate for eating. Though I‚Äôm still a little “weird about food,” I think I‚Äôve struck a happy balance. ‚ÄĒTamara, 21