Crave: Why You Binge Eat and How to Stop 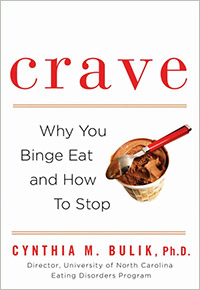 A renowned expert on binge eating, the director of the Eating Disorders Program at the University of North Carolina, shares proven techniques for conquering food cravings.

Clinical psychologist Cynthia M. Bulik, specially trained in psychiatric genetics, is a leading authority on eating disorders such as binge eating disorder (BED). For twenty years she and other researchers have tracked thousands of people, and have found that BED runs in families. I n 2000, Bulik was one of a group of researchers who studied eight thousand sets of twins in a Norwegian registry to learn more about how genes contribute to binge eating disorder. T hey found an astonishingly high heritability of 47 percent.

Binge eating disorder is less well known than anorexia or bulimia nervosa but is more prevalent. Health professionals estimate that more than five million American women and three million men suffer from BED. Jane Brody revealed in the New York Times that when she was twenty-three years old, her food binges were so extreme that “many mornings I awakened to find partly chewed food still in my mouth.”

Genetic predisposition, brain chemistry, psychology, and cultural pressures increase a person’s susceptibility to BED, but bingeing is not inevitable. Crave helps readers understand why they crave specific foods, recognize what triggers their strong urges, and get control over their responses to those triggers. BED is highly treatable; Bulik shares with readers a set of easy-to-implement “curb the crave” techniques that has empowered patients at the U NC Eating Disorders Program and elsewhere to triumph over their binge eating. T hrough the stories of some of these patients—men and women, young and old—and with the guidance of Bulik, readers will develop effective strategies to successfully conquer their cravings and establish healthy eating and activity habits.